Add My Business Add My Event

I am overwhelmed while writing this review as Laura Casey Interiors has provided me with amazing interior designing service. I never thought my house could look so beautiful, but they ..
Review for STATS Restaurant & Bar by Anqi
Rating:

Perfect place for watching the game. I'll definitely be back. Experienced some of the best service I've had while in Charlotte.
Review for Big Ben British Restaurant and Pub by Anqi
Rating:

Best, and most authentic British Pub in Charlotte.
Review for CharBar No. 7 Carmel by Jillian
Rating:

Great for a day with the family.. if you have young kids!
Review for Pour Taproom by Nicholas
Rating: 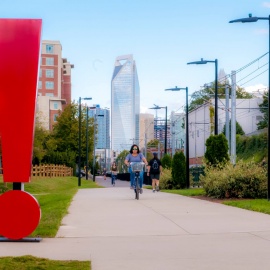 Hotels & Things to Do in South End View All

Levine Museum of the New South

Nightlife in South End View All

The Wine Loft at South End

Restaurants in South End View All

Shopping in South End View All

The city of Charlotte in North Carolina serves as a hub for a lot of different media sources. The Historic South End of Charlotte has a lot to offer its visitors. There is quite a variety of businesses and retail shops, restaurants, arts and cultural venues are a part of the South End's attractions. A range of residential options are available as well. You can easily reach the south end, whether you are on foot, riding a bike, driving a car, or using transit. The LYNX light rail train is a very good option as it runs through the main points of interest in South End. The district's four train stations enable you to quickly reach your desired location in South End. The historic South End district rests to the immediate south of Uptown Charlotte, North Carolina. It is usually referred to simply as South End and is one of three Municipal Service Districts in Charlotte. The South End's history dates back to the 1850's. It began to take form with Charlotte's first railroad line, connecting the Queen City to Columbia and Charleston, SC. With the passage of time, a thriving manufacturing community populated the area along the tracks. The community earned its livelihood from the booming textile industry. During the 1970s and 1980s the industrial area declined. It revived again in the early 1990s when the mill buildings and warehouses were resorted by restaurants, shops, and design-related industries. The area has a number of renovated factories and a good mix of commercial, retail, and high end residential construction. The area has different well-known businesses, such as Price's Chicken Coop, Design Center of the Carolina's, Woods on South and the national headquarters of Concentric Marketing

Looking for the best restaurants for Father's Day in Charlotte? Well if you want to spoil the man who raised you, these Father's Day

Best Places To Eat For Mother's Day in Charlotte

Treating mom this year can go a long way and why not treat her to one of the best places to eat for Mother's Day in Charlotte. These Mother's Day

Things To Do in Charlotte This Weekend | February 20-23

Wondering what to do this weekend? Our weekly guide of

Sushi in Charlotte is as delicious as all the other southern delicacies in the 704. These Japanes

Christmas is meant to be special for many reasons; from families giving gifts to eating delicious food. It's definitely not all of the preparing or clean-up that goes with it, so if you want...

Charlotte is one of the coolest cities on the east coast to visit, but why? Bustling entertainment, delicious food concepts, wonderful nightlife, and some of the most diverse museums in the world. We...

From sports bars to southern restaurants in Charlotte, most diners and bars have a take on America's favorite meal, chicken wings. But which of these eateries serve th

If you have a favorite team in any sport, you've probably established a favorite bar to watch your team play. If you haven't or want to try a new bar or restaurant in Charlotte

Looking to grab a beer that doesn't taste like water? Whatever beer you prefer, these craft beer bars in Charlotte have delicious drafts and bottles to make you appreciate drinking a cold one.

Where To Find The Best Poke Bowls in Charlotte

If you love sushi in Charlotte, you are in luck! The newest dining trend, poke, has hit the East Coast and is basically sushi elements in a bowl. With so many d

Tourist attractions in Charlotte are showcased by several wonderful museums, parks, and things to do. Which of these fun things to do and place to see do you need to exp

A gaming bar in Charlotte is one of the best options for an entertaining night out at any day of the week. From pinball to skeeball, if you're looking for so

If you get a craving in the middle of the night, which local joints can you trust to stay open late? Some of the best restaurants in Charlotte have light-night options for all

Thereâs no point in greeting New Year with old grudges and sadness. Instead, letâs enter into a new year with the best memories...like watching the fireworks for New Year's Eve in&

Charlotte is the most northern "Southern" state and its culture runs deep in the delicious food its restaurants purvey. Barbecue in Charlotte is next to none when thin

Bars Open on Thanksgiving in Charlotte

Thanksgiving in Charlotte is a time to be with family, eat delicious food, and sip some tasty cocktails. If you want to kick your feet up this Thanksgiving and enjoy

Best New Year's Eve Parties in Charlotte to Ring in 2020!

Cherish the memories of 2019 and come into 2020 high on life in Charlotte this New Year's Eve! Celebrate the start of  2020 with family and friends at some of the bes

Restaurants Open on Thanksgiving in Charlotte

Grab your lawn chairs and sparklers Charlotte! With Independence Day rapidly approaching, there is an abundance of festivals to help you and your family join

Memorial Day is one of the most important holidays in the country as itâs a time to honor those in the military who sacrificed their lives defending our country. While some may

Mother's Day is just around the corner, and you can't go wrong with giving Mom a fresh, beautiful bouquet of flowers. Not sure where to get one? Read on for our list of the best

Free Things to Do in Charlotte

Contrary to popular belief, we don't always need money to make memories and have a great time. Whether you're a visitor looking to maximize your travel budget or a local looking to connect with your...

When the sun goes down in Charlotte, thereâs still plenty to do! From live music to unique bars to good restaurants, the city has something for everyone, so check